Alex was born in Glasgow, Scotland in 1951. He started playing harmonica at the age of five and left Glasgow for London in 1967, becoming immersed in the exciting era of popular music at the time. Alex was drawn to the black music of soul, R&B and reggae and from there soon discovered the blues. London had a vibrant blues scene at the time and Alex made sure he saw many of the great touring blues acts (Champion Jack Dupree, Mississippi Fred McDowell, Eddie Boyd) as well as the strong array of local artists. In 1970 Alex moved to the Channel Islands and learned to play guitar in the intense folk/blues circuit. In 1973 Alex came to Australia where he played extensively in the Melbourne folk clubs. Alex has since become very popular in the Australian blues scene having performed countless venues and major festivals both solo and as a duo with great finger picker Nick Charles. His festival performances range from the East Coast Blues and Roots Festival in Byron Bay, Australia’s biggest blues festival, through to Brisbane’s steel guitar festival, even the famous Edinburgh festival. 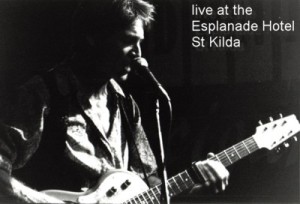 Alex’s discography is impressive, three albums with Nick Charles, a critically acclaimed solo Hawaiian album “Twilight blues” and after many requests Alex recorded and released, in 2004, his first solo blues album “The blues is here to stay.” The following year Alex followed up with his second Hawaiian album “Alex Burns’ Adventures in Paradise”, again critically acclaimed. Alex yearned to play the wide variety fo music he loves, Blues, Jazz, Hawaiian even Calypso but struggled to find the right line up. Alex then met up with like minded guitarist, Jen Hawley and formed a duo, which explored early jazz and blues and yes, a bit of calypso. They then formed a larger outfit, the Alex Burns and Jen Hawley Band and released a 4 track EP in 2011. The music continues to develop with solo, duo and band work, plus the development of Club Tropicana, a band that plays Hawaiian and more!