Alex learned to play Hawaiian steel guitar in 1990. He was heavily influenced by Bob Brozman, 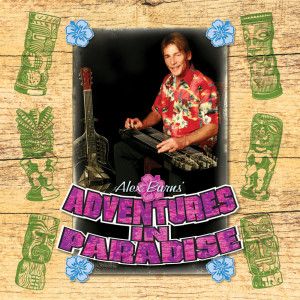 who he had first
heard on his first album “Blue Hula Stomp” in 1987. Alex then began corresponding to Brozman who turned Alex onto all the heavy guys of the golden era of Hawaiian music from 1927 – 37 (Sol Hoopii, King Benny Nawahi, Sam Ku West). In 1996 Alex was performing at the Brunswick Festival where he met 78-year-old headlining act, Jim Jensen, a Melbourne icon since the thirties. Alex became fascinated with one of his tunings, the C#M7 tuning, which Alex then spent the next year studying with Jim.

Alex now plays a twin neck electric steel master built for him by famous “Texan Playboy” steel player, Herb Remington, which allows Alex to play in any setting from Hawaiian to Rock and roll. Alex’s Island playing has seen him perform at the Brisbane Steel Guitar Fest, at the Brunswick Music Festival with Tahitian singer Alfred Harua, and the release of a solo album of Hawaiian and jazz classics “Twilight blues” in 1999 and “Alex Burns’ Adventure in Paradise” Project in 2008

“A great CD, thanks very much. The sound is particularly nice with a lush feel to it. The female singer is excellent and your own playing is very authentic. Well Done.”
Steve Evans – Beltona Resophonic Guitars

“Loving it, your best to date. The vocals are spectacular and the overall sound, especially your steel, are very cool.”
Kerryn Tolhurst – Musician/Producer

“Alex, just a short note to say how much I have enjoyed the album – it is fantastic. I admire you as a purist and the outcome with this record is very impressive and enjoyable.”
Rob Walker – National Marketing Manager, Allan’s Music

“Alex did an excellent job by putting this CD together with his fine musicians. It shows that Hawaiian music is in good hands.”
Gerrit A. Venema – Secretary of the Dutch Foundation for Hawaiian Music – The Netherlands

“What a great choice of material …excellent playing of course too, I’m enjoying all of it a lot. Delighted in particular to hear Benny’s “Waikiki Blues“ and Sol’s “Radio Blues” …two of my absolute favourites.”
Les Cook – Grass Skirt Records (www.GrassSkirt.co.uk)